Meet the designers and choreographers to know more about their inspiration and the production process of the dances and costumes.

Scan the QR code for more details and registration.

**The organiser reserves the right to alter the programme and artists. 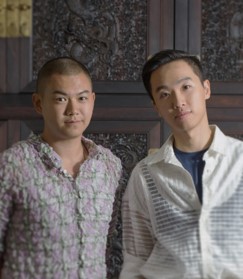 PONDER.ER is the brainchild of creative duo Alex Po and Derek Cheng. The pair met whilst they were studying at the prestigious Central Saint Martins in London. Both of their BA collections are being selected to showcase at the press show. Po then went on to further sharpen his skills and vision at the Royal College of Art and specialised in men’s knitwear.

With a common interest in exploring the world of menswear through an alternative approach, the creative partnership was formed in 2019 with the intention of challenging gender stereotypes and questioning social norms. PONDER.ER, a gender-fluid label was born to expand and reinterpret the contemporary men’s wardrobe through dissecting and reconstructing ideas inspired by traditional menswear, found objects and everyday experiences in urban cities. Born in Hong Kong, Leung Chunlong graduated from Beijing Dance Academy in 2009 and from The Hong Kong Academy for Performing Arts in 2011, with a concentration in Ballet. He joined Hong Kong Ballet as a member of the Corps de Ballet the same year and was named Coryphée in 2014. His choreographic works included L’espoir (2017) and  tʃHey (2016). Leung received an Outstanding Performance Award at the Taoli Cup Dance Competition in 2003. Born in Zhejiang, China, Li Lin trained at Beijing Dance Academy. He joined Hong Kong Ballet as a member of the Corps de Ballet in 2010 and was named Soloist in 2014 and became Principal Dance in 2019. Since joining the Company, Li has presented choreographic works at Hong Kong Ballet’s Choreographers’ Showcase, including Break Away (2014), Follow Your Heart (20 and The Bow (2017). He danced Pas de Deux from Krzysztof Pastor’s in Light and Shadow with Liu Miaomiao at the International Ballet Festival of Havana in 2014 and w second prize at the Taoli Cup Dance Competition in 2009. 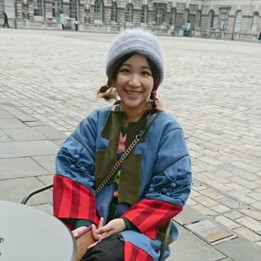 SUN=SEN, pronounced as “SUNEQUALSEN”, is not only an art, but also a story-telling brand. SUN=SEN is ingrained with droll and playful designs. By using different workmanship, SUN=SEN collages a mélange of materials to create a strong and unique impression, which brings everyone to her creative world and details every interesting story.

Sun Lam graduated from the University of Southampton with a Master of Fashion Design with distinction in 2015. Her graduation collection was chosen as a finalist at the iD Dunedin International Emerging Designer Award 2016 and was selected to showcase at the Dunedin Public Art Gallery. After her graduation, Lam works closely with British independent designers Martina Spetlova and Roberts Wood. In 2017, Lam and her partner were selected as one of the incubatees of Hong Kong Design Centre Design Incubation Programme. She was also chosen as one of the New Talents for the Paris Tranoi show. Born in Marikina, Philippines, Luis Cabrera trained at Philippine High School for the Arts. He danced with Ballet Manila and Ballet Philippines before attending The Hong Kong Academy for Performing Arts on a scholarship, where he graduated with a diploma in Dance in 2015. Cabrera joined Hong Kong Ballet as a member of the Corps de Ballet the same year and became Coryphée in 2019.

With Hong Kong Ballet, Cabrera has danced the featured roles of Fritz and Italian Doll in Terence Kohler’s The Nutcracker, Birbanto in Anna-Marie Holmes’ Le Corsaire and performed in Wayne McGregor’s Chroma, John Meehan's Swan Lake...etc. and Yuh Egami and Hu Song Wei Ricky’s The Rite of Spring. He choreographed With-IN in 2017. Growing up in the vibrant city of Shanghai, China, Vincent Li trained as a dancer from a young age, wishing to be a professional performer. He took the path into the world of information technology. After a period of study and work in Australia, he boldly decided to return to his real self, re-enter the quixotic art world and engage into fashion design.

Li studied fashion in Melbourne and Hong Kong. In 2013, he went to London to work as an intern for J.W.ANDERSON. When he returned to Australia, he launched his personal design brand “VINCENT LI” in Melbourne in 2014. Veteran Hong Kong choreographer Helen Lai, who has won the Hong Kong Dance Awards seven times, was the artistic director of the City Contemporary Dance Company from 1985 to 1989 and its resident choreographer from 1991 to 2011.

Accolades included Badge of Honour from the Queen of the United Kingdom in 1995, Medal of Honour by the Hong Kong Special Administrative Region Government in 2000, Choreographer of the Year from Hong Kong Artists’ Guild (1990), a Distinguished Achievement Award at the 2002 Hong Kong Dance Awards, Award for Arts Achievement (Dance) in 2003 and Outstanding Contribution in Arts Award in 2015 from Hong Kong Arts Development Awards and an Honorary Fellowship from The Hong Kong Academy for Performing Arts on July 2004. Jane Ng explored her fashion design sense at the alternatif workshop. While working with international brands, her personal aesthetic and technical knowledge continued to develop and strengthen through the participation in the HKTDC’s fashion shows and HKTDC Young Designers contests.

After that, she developed her personal brand phenotypsetter and set up her shop at PMQ in 2014. A year later, she completed her Master of Visual Arts (Experience Design) at the Hong Kong Baptist University.

In fashion, she believes there are always other possibilities, new and playful approaches to design. She specialises in garment concepts, garment construction, fabric manipulation and graphics. 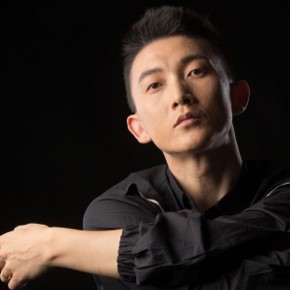 Designer Aries Sin is the founder of MODEMENT. Her outstanding talent, expertise and unique design philosophy have been recognised in the world fashion market. She was honoured as “Asian Top Fashion Designer of The Year (Prêt-a-Porte Category)” in 2014 by Fashion Asia China and was also selected as one of the “40 Next Generation of Design Talents  under 40” by Perspective Magazine and won a Bronze Award at the 2013 Design for Asia Awards.

From Joyce Boutique's pop-up store to a six-month exhibition at the Hong Kong Heritage Museum, Sin’s designs have successfully exceeded the boundaries of creativity and culture. Yuh Egami graduated from The Royal Ballet School in London and joined the Hong Kong Ballet in 2002. He assumed the additional role of Répétiteur for the Company in 2014, was appointed as Assistant Ballet Master in 2018 and became the Ballet Master in 2019.

Egami was an associate choreographer to Yuri Ng in his full-length work Firecracker in 2010. Together with Hu Song Wei, Egami has co-choreographed several full-length works for the company—The Frog Prince-A Ballet Chinois in 2013 (as associate choreographers to Ng), Bolero in 2015, Carmen in 2017 and most recently The Rite of Spring in 2019. His work Bolero (2015) with Hu, won the Outstanding Ensemble Performance at the 2016 Hong Kong Dance Awards. Hong Kong choreographer Yuri Ng is the Co-Artistic Director of Yat Po Singers and was an Artist Associate for Hong Kong Sinfonietta from 2011 to 2013. Accolades include Artist of the Year Award – Choreographer from Hong Kong Artists’ Guild in 1997, the Prix d’Auteur at the 6th Rencontres choregraphiques internationales de Seine-Saint-Denis (Bagnolet) for his choreography of Boy Story in 1998 and Hong Kong Dance Awards for Outstanding Choreography in 2000 and 2019. He also received the Distinguished Achievement Award at the 2012 Hong Kong Dance Awards and the Award for Best Artist (Dance) at the Hong Kong Arts Development Awards 2013. Yeung Chin graduated from the University of Westminster with a master's degree in fashion design. In 2003, he won the YDC Special mention award by Hong Kong Design Centre.

From that year to 2006, he organised and participated in several fashion shows during the Hong Kong Fashion Week. Later then, he won the merit award in the young talent competition organised by the Hong Kong Creative Centre in 2009 and in the same year, his work has been exhibited during the “Cheers 2009” Exhibition which was held at the London OXO Tower. One year later, he designed costumes for the City Contemporary Dance Company.

In 2015, he was invited by the Singapore Design Center to participate in the exhibition. Besides, he has also participated Fashion Week in New York, Paris and Shanghai until 2017. Born in Tennessee, US, Forrest Rain Oliveros trained at Ballet Tennessee, Ellison Ballet and The Ailey School in US. He danced with Charlotte Ballet and other companies before joining Hong Kong Ballet as a member of the Corps de Ballet in 2017.